On the 22nd of January 2019, at the Visitors Building of the European Commission, about 500 people gathered to attend the presentation of 2019’s call for proposals in the Energy Efficiency (EE) area. The guests represented the most diverse types of organizations: Public Authorities, Universities and Research Institutes, Industry and Technology Providers, NGO, Federations and Consultants. All these different actors were attending the sessions trying to gather more information about this year’s calls and to network with potential new partners.

The budget set for the 2019’s H2020 Energy Challenge is 122 Mln€, the topics open are 16 and the total number of projects to be funded under this action is approximately 60. The types of actions contemplated are both Innovation actions (IA) and Coordination and Support actions (CSA). The first meant to have a budget of 3-4 Mln and a co-financing rate of 70%, whereas the CSA have usually a more restrained budget but a full coverage of the action (100% financed).

The calls aim at targeting both the demand (Energy Consumers) and the supply side (Energy Efficiency) of the energy market and will cover five macro-areas: Buildings, Industry, Consumer & Services, Financing Energy Efficiency and Public Authorities and Policy Support. 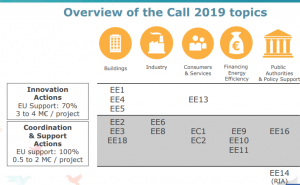 The Buildings’ Energy Performance Challenge will absorb the bulk of the EE budget. This area of action is prioritized due to the lack of capacity of member States to comply with the Directive EU 2018/844 on the Energy Performance of Buildings. This Directive in turns has been adopted to address, on a European level, the Paris Agreements. Not performative buildings are the cause of an excess of energy consumption and the majority of European buildings is aged more than 50 years, meaning they were built before such criteria even existed. A holistic European approach is needed also because the crisis paralyzed the construction sector and still nowadays the renovation rate is 1% per year.

Smarter and better performative buildings not only will reduce energy consumption, contributing to fight greenhouse gas emissions, but they will contribute to alleviate Energy Poverty. According to the Energy Poverty Observatory this condition occurs “whenever households experience inadequate, levels of warmth, cooling, lighting and other essential energy services”. Fifty million people are estimated to live in this condition due to low income and unaffordable costs of energy services. Side effects affect physical and mental health of people. Thus, how to prevent this phenomenon from causing internal clashes into societies? The European Commission seems to know the answer: political engagement. Public administration, provinces and regions need to participate to these actions and set good examples of capacity building, to be replicated elsewhere in Europe later on.

The public sector plays also another key role that is intervening whereas market failures occur. The non –existence of a market is a market failure per se. And indeed, a market for efficient energy does not exist yet. The challenge to be taken up here is to change the perception of investors on the risks associated with EE investments and to make use of public resources to boost private investments and, eventually, keep steady the ratio between public and private investments. Whether projects under this heading (Financing EE) will be successful or not will determine the sustainability of the whole action and its dependence on public funds. If an ad hoc market for EE investments will be not created, the only capitals flowing into this sector to finance innovation will be public money and the risk is to generate a distortion in the competitive market (State aid measures or even public monopoly).

Finally, on the demand side, the innovative efforts are to bring the Consumer at the centre of the action. Active citizenship and participation, informed choices, energy communities are the key words to bear in mind.

Sixteen different calls for proposal but an overall holistic approach that interconnects them into what might look like a tangled web. But the potential applicants attending the event were helped to get to the bottom. Successful ongoing projects were mentioned as reference, project managers of previous years funded projects were invited to speak and share tricks and tips on how to address the ambitious challenges of the action and demonstrate the added value, the strength of the project in only 50-70 pages. The presenters highlighted the importance of quantifying the impact, bringing concrete results, of sticking to a clear structure and consistency. But is this enough to get awarded?

Although the calls are very specialised and ambitious, the competition is quite severe. Last year 189 proposers applied but only 47 were awarded, meaning that only 1 out of 4 won. 32% of the projects exceeded the threshold but were not financed. Presenting a good idea and a good proposal is, therefore, not enough. You need to go after excellence.